Woman made a vest out of her own hair 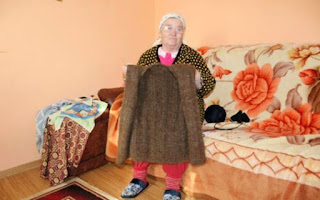 This is no ordinary vest that Ortansa Pascariu, a 65-year-old from Romania, is holding.The result of two decades’ work, the item of clothing has been meticulously stitched together – from the woman’s own head hair.Pascariu, who
lives in the small village of Stauceni in the north-eastern side of the country, was told by friends that she should never throw away lost hair.Taking their advice to heart, she decided to keep all combed-out hair in a bag – and 20 years on could boast a huge mound of it.

Of course, she wasn’t sure exactly what to do with it, But, as a knitting enthusiast, she eventually decided to fashion it into a garment.
She said: “I heard from elderly friends that women should not throw their lost hair away after combing.

Ortansa with husband Vasile (CEN)
“They need to keep it. If not, the elderly say, it is as if you are throwing away your beauty."
Believing what she was told, she said: "I started gathering my hair when I was 40 and by the age of 60 I had managed to gather one kilo, which was as much as I needed for a vest.
"This is hair lost during combing. I used to grow it very long. I had long threads that went from my head to my hips.

Ortansa trying on the vest for size (CEN)
"I made each thread I used in knitting from two hair threads so it is more resistant. I finished the vest in a week.
“It was strange, but also very pleasant to knit something in your own hair.”
Her husband, Vasile Pascariu, is impressed, too.
“I’ve touched it and it’s like some kind of soft wool,” he said.
I’m very proud of what she managed to do. It’s really complicated. The vest is also very nice."
After keeping the vest for five years, she then gave it as a present to the local ethnographic museum where it is currently kept. 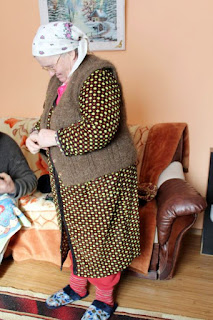