What would you do if this happened to your child's hair? 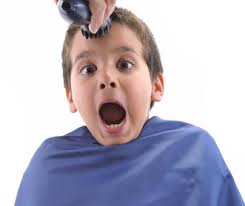 The hair of a minor girl, a class three student of a school at Barauni in Begusarai district, was cut as punishment for failing to keep two ponytails.The school named "Kidzee
Vidyalaya" is situated in the campus of the Indian Oil Corporation at Barauni."A complaint has been lodged by the father of the girl and we are looking into the matter," In-charge of Town police station Mohammad Islam said. Islam said the girl's father had also complained to the IOC management about the incident which occurred yesterday. As per the complaint, the hair of the minor girl was cut on the instruction of the school principal. he mother of the girl told reporters that the school authority had not intimated the family before her daughter's hair was cut